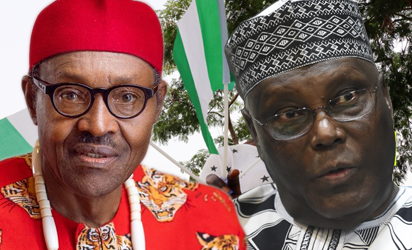 The nationwide solemnity arising from the killing of more than 100 Nigerian soldiers by Boko Haram in Melete, Borno State, was yesterday breached by the exchange of salvos by the two leading presidential candidates, Muhammadu Buhari and Atiku Abubakar.

Both presidential candidates exchanged blames, even as the Peoples Democratic Party, PDP, also, yesterday, charged the National Assembly to launch an inquiry into the issue. The All Progressives Congress, APC, had on Sunday through its Deputy National Publicity Secretary, Yekini Nabena accused Atiku of leading a gang of selfish and mercantile politicians desperate to take power from the ruling APC.

Atiku in response to the claim, which he said cast aspersions on his person on his birthday and his turbaning as Waziri Adamawa, observed that the Melete incident happened on the same day Buhari launched his presidential campaign, an occasion he claimed the nation’s service chiefs withdrew from at the last moment. Meanwhile, the Presidency has described the Metele killing as an isolated case, insisting that Boko Haram has been technically defeated.
While noting that the APC has yet to make a statement on the issue, Atiku challenged Buhari and the APC to donate 10% of the reported N100 million spent by the party on advertorials to the families of the deceased soldiers. “As a matter of fact, we now know through Premium Times report, that these real Nigerian heroes were killed on November 18, 2018, which was the exact time the candidate of the APC, Muhammadu Buhari, invited the service chiefs to attend the launch of the plagiarised #NextLevel launch at the banquet hall of the Presidential Villa. “The nation can only wonder if the Metele massacre could have been avoided if the APC and President Buhari had allowed the service chiefs to focus on their core duties, rather than on his ill-fated re-election campaign. “We at the Atiku Presidential Campaign Organisation commend the service chiefs for beating a hasty retreat from the event as soon as they discovered that President Buhari was trying to hoodwink them. “It took Waziri Atiku Abubakar only a few hours to respond to the incident and express support, while it took the APC’s President Buhari a whole week to express ‘shock.’ We, therefore, wonder who is truly ‘selfish.’ “It is left to Nigerians to compare and contrast who is a leader and who is a follower, based on the conduct of these two parties. Buhari, Atiku tango over killing of soldiers in Borno “In any case, we would like to inform the APC of Waziri Atiku Abubakar’s call for financial support from well-meaning individuals and institutions for the survivors of the Metele massacre, and, indeed, all who paid the supreme sacrifice in the front lines for us to be safe. “Seeing as the APC spent N100 million to buy frontpage advertorials in all the papers on that fateful day of November 18, 2018, we appeal to them to consider donating even 10 per cent of that amount to the endowment for the families of our heroes as proposed by Atiku Abubakar. “Incidentally, the APC’s statement accused former Vice President Atiku Abubakar of ‘selfishness’ and ‘mercantilism’ which is very curious as the Waziri dedicated his birthday, not to himself, but to celebrating the 100 or so heroes of the 157 Task force Battalion of the Nigerian Army who lost their lives to Boko Haram at Metele in Borno State. “That the Waziri Adamawa asked for anyone who wished to give him birthday gifts to instead endow such on the families of the slain heroes is the opposite of selfishness. “Ironically, the All Progressives Congress that is now accusing Atiku Abubakar has not deemed it fit to pay tribute to these gallant men who gave their lives in order to secure the lives of others. “As a party, they have not issued even one statement condoling with the slain or their families, neither have they offered any tangible support to the families of these fallen heroes. Yet, they are accusing the Waziri, who has shown commitment to honouring these heroes, of selfishness.”