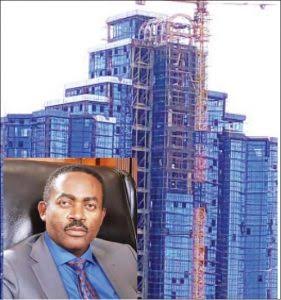 The world class pain doctor and PDP gubernatorial aspirant Dr Godwin Maduka (Okosisi Orumba) has declared total commitment to the Peoples Democratic Party and Anambra State in general, noting that a good leader should be able to combine political and public interest in order to contain the challenges of public administration and party leadership.

This statement was contained in an address delivered by Chief Sopulu Nwafor in the course of representing Dr Godwin Maduka in a meeting with PDP LGA Chairmen at the party secretariat today. The former party officer and present key stakeholder expressed satisfaction for the fact that the visit afforded him an opportunity to meet his political contemporaries in party leadership.

Speaking further, Chief Nwafor appealed to the party leaders to note that politics and political victory depends on many indicators which includes but not limited to capacity, antecedence, preparedness and acceptability. All indicated listed have been duly met by Dr Maduka according to him. He also quoted Dr Maduka as having said that his commitment to serve anambra state and recondition the party structure remains end to end.

He also assured the LGA party leaders that they are more or less harbingers sent to deliver anticipatory message of what is to come (Dr Maduka’s meeting with them). He also pleaded with them to look beyond the clannish or highest bidder mentality of some politicians and look inwards to elect Dr Maduka who has over time proved his mettle in community and human capital development.

Other members of the delegation like Chief Earnest Okafor, Chief ken Ejekam, Dr Mrs Kate Obioji and Dr Emezie Madu in their separate speeches aligned with the spokesman of the group Chief Sopulu Nwafor on the need to elect a credible person who will see them as his constituency, while they would have him as their candidate for the forthcoming gubernatorial election.

The PDP LGA chairmen of Onitsha North, Onitsha South and Ekwusigo in their reactions raised concern over perceived anomalies that needed to be reviewed and fine tuned in the delegation’s approach, which was consequently addressed by Chief Ernest Okafor who assured them of their principal’s willingness to address all genuine concerns raised in the meeting.

The chairman of Idemili North LGA and chairman of all local government chairmen welcomed the delegation and also made it clear that his colleagues and himself are tired of electing candidates, hence their present search for a governor who will deliver Aguoka to the party in the ballot.

Members of the delegation were on their way out when the State Chairman of the party Hon Sir Ndubisi Nwobu arrived at the party secretariat. They however exchanged pleasantries and departed with deep satisfaction for the successful proceedings.