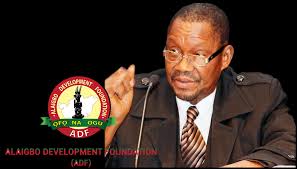 THE RULING OF THE SUPREME COURT OF NIGERIA ON THE GOVERNORSHIP ELECTION IN IMO STATE,

The Working Committee of the Alaigbo Development Foundation (ADF) has duly studied the Ruling of the Supreme Court of Nigeria on the 2019 Governorship Election in Imo State and hereby wish to issue this following Statement.

The ADF duly followed and studied the results of the 2019 Governorship and other Elections held in Imo State. In addition, we have followed the two subsequent Rulings of the Election Tribunal and the Court of Appeal on the result of Governorship Election in Imo State. The ADF Legal Bureau has also painstakingly studied and provided a Report on the election and the subsequent Rulings on its outcome.

In the light of the above, The ADF Working Committee hereby not only reject but condemn the Ruling of the Supreme Court of Nigeria as a mindless assault on Democracy and Rule of Law which is its foundation. It is, above all, an arrogant assault on the fundamental right of Imo people to decide those to whom they give their mandate to preside over their political affairs for the next four years.

ADF position is based on a number of factors surrounding the judgement, among which is the technical and substantive impossibility of a candidate who came fourth in the election with just only 96,45 votes and came 4th in the Governorship Election would overtake every other candidate to defeat the number one candidate who scored 273, 404 votes. And this is a candidate whose Party, the All Progressive Congress (APC), did not win any seat in the State House of Assembly Election held simultaneously with the Presidential in the 2019 General Election. What is more, the manner in which the Justice Tanko-led Supreme Court judges did their on- the-sport calculations and came to their conclusion is so bizarre that one wonders whether this is happening in a normal human society or in Alice’s Wonderland.

The Justice Tanko-led Supreme Court appear to be desperately keeping faith with the grand design for which Justice Tanko was brazenly fostered on the Nigerian Judiciary after Justice Onnoghen was hounded out of office.

Our people in Imo State and the entre Igbo nation should regard the removal of the legitimately elected Governor of Imo State as a great assault on the Regional solidarity of Alaigbo, especially now that Regional cohesion is vital to the defense and security of Alaigbo from the invaders.

To our brother, Senator Hope Uzodinma, the beneficiary of the Supreme Court Ruling which we, in ADF reject, we say to you that you should remember that the Igbo blood is in your veins. Furthermore. You should also be mindful of the use-and-dump fate of some of our bothers some of whom are now shamefully languishing in jail.

To Our people in Imo State and Alaigbo in general, we, in ADF, say to you: –

The Terrain could be as Rugged as the Colorado Mountain.

Any Descent, no matter how Steep

Should be no Reason for Resignation, So Don’t Give Up!

Your Right to Self-Determination and Freedom is Inalienable.