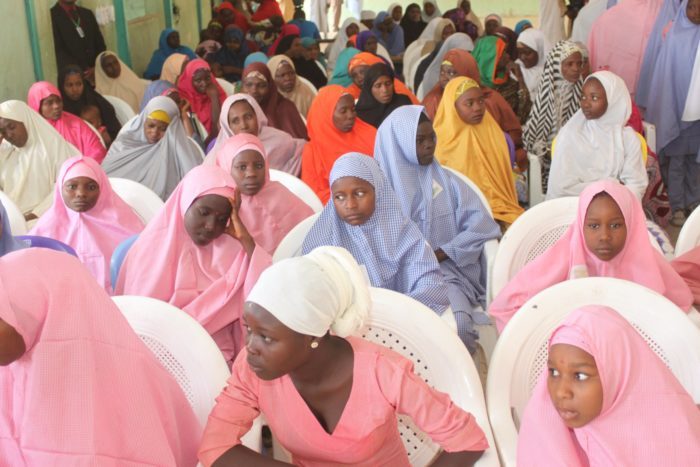 The hope of some parents of the abducted Dapchi schoolgirls to reunite with the children and wards was dashed yesterday with the sad news of the passing of five of them.

According to one of the released girls, Khadija Grema, 12, a JSS3, they died in the hands of Boko Haram as a result of exhaustion, stress and trauma.

Amidst the euphoria that greeted the release of over 100 of the 110 abducted Dapchi schoolgirls and the grief that trailed the deaths, the military has announced that the freed girls, aged between and 19, would have to wait a while before reuniting with their parents.

This is to enable the girls to be debriefed by the military authorities and also undergo medical examination and care.

Confirming it, Minister of Information and Culture, Alhaji Lai Mohammed said: “Just as we did when we had the first set and second set of release of the Chibok girls, they will be quarantined and be psychologically counseled before they go back to their schools.”

House of Representatives member representing Bursai/Geidam/Yunusari constituency, Goni Bukhar, also confirmed that the girls would remain in the custody of the government for “few more days.”

Boko Haram driving in 11 vehicles early, yesterday morning, reportedly dropped the schoolgirls at the heart of Dapchi, Yobe State, over a month after they were abducted.

Residents said they were alarmed when the convoy of four-wheel drive vehicles painted in military colour drove into the town at about 8am chanting ‘Allah Akbar’ (God is great) without firing a shot, Aliyu Alhaji Maina, one of the parents told journalists at Jumbam, about 2km to Dapchi.

Grema said the insurgents did not maltreat them, adding that they were moved into a house, crossing a river with canoes and ending up in an unknown location where they were kept till Tuesday night before their release.

“They didn’t beat us, they didn’t harass or maltreat us. They said we are children of Islam. They bought water, malt drink and kulikuli (groundnut cake) for us when they abducted us from our school in Dapchi,” she said.

“For the release to work, the government had a clear understanding that violence and confrontation would not be the way out as it could endanger the lives of the girls, hence a non-violent approach was the preferred option. Within the period when the girls were being brought back, operational pause was observed in certain areas to ensure free passage and also that lives were not lost,’’ he said.

He said no ransom was paid. “The only condition they gave us is not to release (the girls) to the military but release them in the town of Dapchi without military presence.”

Meanwhile, a Federal Government delegation comprising ministers of Information and Culture; Interior and Minister of State for Foreign Affairs are on their way to Maiduguri to meet with the freed girls.

On what government expects to achieve with the delegation to Dapchi, Mohammed said: “I think the issue of the delegation, until we clear with relevant security authorities, is not something I can talk about right now. We are constantly talking to those on ground. Don’t forget as of now that area has become an operational area and so we have to take advice from the security operatives on what to do. What is important is that we must be able to brief you regularly as regards development…”

Reacting to the news, both the Peoples Democratic Party (PDP) and the

According to Fayose: “This appears like an arranged abduction and an arranged release, but we thank God that the innocent girls have returned home and we condole with parents of those that died.”

In a statement issued by his Special Assistant on Public Communications and New Media, Lere Olayinka, the governor said it was strange that the girls could be brought back to Dapchi by their abductors without the security agents knowing when they were returned and who returned them.

“Curiously, the same spirit who made sure that all military checkpoints in Dapchi and other surrounding towns were removed to pave way for abduction of the girls also made sure that the girls were returned without any security agent seeing them.”

The governor reiterated his allegation that Boko Haram insurgency had become a source of treasury looting.

“Those benefitting from Internally Displaced Persons (IDPs) scams, payment of ransom (in dollars) to free those abducted by the Boko Haram insurgents, among others will never wish to see the end of the insurgency,” he claimed.

But the Amnesty International, which on Tuesday said it had uncovered evidence that some military and security agents were alerted hours before the abduction, described the release of  the girls as a huge relief.

However, it criticised the decision to hold them in government’s custody, saying it would further prolonging their ordeal.

“The authorities must immediately release them and ensure that they are able to return to their families or be provided with an alternative safe option if they so-choose.

“The authorities must also ensure the girls have access to comprehensive support, including confidential counselling and medical care.

“Furthermore, it remains absolutely vital that the Nigerian government investigates the security failures that led to the abduction- a fact highlighted by the tragic news that five of the schoolgirls died in captivity.

“The Dapchi abduction must be the catalyst for the government to ensure adequate protection of all schools in Northeast Nigeria so that this can never happen again.

“As a first step towards meeting its responsibility of protecting civilians from Boko Haram attacks, the results of the two investigations into the Chibok girls’ abduction in 2014 must be made public.”

Another leading pro-democracy and non-governmental organization, Human Rights Writers Association of Nigeria (HURIWA) also expressed shock at the news of the death of five of the schoolgirls even as it raised alarm that there could be more to the release than meets the eye.

“It looks like some persons now have the franchise of masquerading as Boko Haram terrorists or may be colluding with the real Boko Haram terrorists to play on the gullibility of Nigerians by staging choreographed abductions and releases of kidnapped hostages either with commercial or political benefits in mind or both. This game of deception must stop and the good people of North East of Nigeria must be allowed to have their peaceful, communal and productive lives back.”

HURIWA through the National Coordinator, Emmanuel Onwubiko and the National Media Affairs Director, Miss Zainab Yusuf, stated that since the Federal Government has demonstrated lack of political will to investigate, document and publicly transmit to Nigerians and the international community, the exact circumstances, the actors and sponsors of the Boko Haram terror activities, there was an urgent need for the organised international community headed by the office of the United Nations Secretary General and the security council to conduct an independent, transparent and evidence-based probe into the whole affairs with the goal of bringing it to a minimal level.

The Arewa Consultative Forum (ACF) also described the release as a reassuring development and commended the Federal Government.

Muhammad Ibrahim, ACF National Publicity Secretary, said in a statement that the organisation received the “good news’’ with immense happiness.

The ACF called on the military and other security agencies to sustain the synergy and fasttrack the search and rescue of the remaining Chibok schoolgirls kidnapped four years ago.

Like the ACF, elder statesman, Tanko Yakkasai also urged the Federal Government to deploy the same resources in releasing the remaining Dapchi and Chibok girls.

Speaking to Daily Sun, he said: “In a situation like this, the priority is to get the abducted people released and governments all over the world and also corporate bodies at times pay ransom to secure the release of their people but they (FG) would always say that they didn’t pay anything. Whether money has been paid or not, we should thank God that some of the girls have been released.”

While rejoicing with parents of the girls and President Buhari, the Muslim Rights Concern (MURIC) in a statement by Prof. Ishaq Akintola advised the Federal Government to renew its strategy to ensure adequate protection for all schools in the insurgency zone.

He said the early return of Dapchi schoolgirls had clearly differentiated between action and inaction of governments.

“Chibok and Dapchi are now reference points in a tale of two Commander-in-Chiefs: one who turns the other cheek while his army turns and runs and another who takes immediate action and puts insurgents on the run, “ Akintola said.

While it is happy that the girls have returned, the United Nation Children Fund (UNICEF) promised to work closely with the Ministry of Youths in Yobe State to provide the necessary support to the girls and their families.

“As we await further confirmation, five girls have reportedly died.  UNICEF grieves with the families who lost their daughters.

“We are grateful for the efforts of all parties in ensuring safe return of the girls to their families,” representative of UNICEF in Nigeria, Mohamed Malick Fall said in a statement.

Since Boko Haram began its reign of terror, particularly in the North-East and neighbouring states, tens of thousands of people have been killed, over two million displaced and thousands abducted. The kidnapping of 110 schoolgirls on February 19 from Dapchi was the biggest mass abduction since the Islamist group took more than 270 schoolgirls from the town of Chibok in 2014.