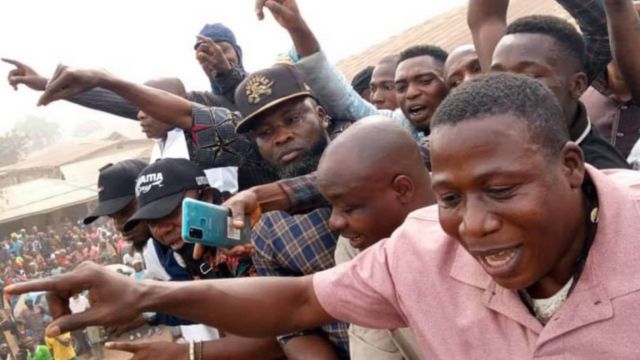 The apex leader of the umbrella body of Yoruba Self-Determination Groups, Ilana Omo Oodua, Professor Banji Akintoye, has reacted to media reports that he has left Nigeria to escape the plots of the Nigerian Government to arrest him.

Akintoye confirmed that he is truly in the Republic of Benin, but not on the run, as widely reported.

In a statement made available to News Men on Sunday by his Communications Manager, Mr. Maxwell Adeleye, the Emeritus Professor of History said he is in the Francophone country to coordinate and supervise how to legally rescue the detained Yoruba Nation Activist, Chief Sunday Adeyemo, fondly called “Ighoho”, from government remand as soon as possible.

Akintoye, a member of the Nigerian Senate in the Second Republic, said just like Ighoho, he has committed no offense against the Nigerian Laws to warrant being arrested, intimidated or harassed.

Like a valiant soldier, Akintoye vowed to return to Nigeria as soon as Ighoho is released by the government of Benin Republic to continue the struggle for the actualisation of Yoruba Nation, saying “it is No Retreat, No Surrender”

“Myself, the President-General and Professor Wale Adeniran (Chairman) of Ilana Omo Oodua, are currently in the Republic of Benin as reported, but not on the run.

“We are here to supervise and coordinate, by all legal and and other means, the struggle for the release of our son and patriot, Sunday Adeyemo Igboho, detained by the Government from custody.

“By demanding peaceful self-determination for the Yoruba Nation, i am not breaking any law, since self-determination is recognized by the International and Nigerian laws to be an inalienable right of every Nationality, large or small, in the world.

“I have earned a solid reputation as a highly respectable advocate of a peaceful self-determination struggle. I have even written a book on the subject which is already being used as a manual by Yoruba self-determination advocates and organizations.

“Irrespective of what the Nigerian Government may be planning against me, I want to say without any fear or intimidation that I will be returning to Nigeria immediately Ighoho is released from the custody. I can’t be intimidated because I’ve not committed any offense, just like Sunday Igboho.

“Let me tell all Yoruba People across the world that there’s no cause for alarm. I didn’t flee to anywhere. I am in Benin Republic running your errands. The struggle is no retreat, no surrender.

The renowned Scholar also debunked the media reports stating that Igboho has been abandoned, and that the Activist is personally funding the court cases against the Governments of Nigeria and Benin Republic to secure his (Ighoho) and his aides’ release, saying “socio-cultural and self-determination groups within and beyond the shores of Nigeria under my supervision paid for every dime spent in Cotonou, Lagos and Abuja respectively till date on the court cases.”

He said “the only court case not under my co-ordination and supervision, and which the Yoruba socio-cultural and self-determination Groups are not paying for is the one in Ibadan High Court, Oyo State.

“The Lawyer handling the Ibadan case, Chief Yomi Aliyu, SAN, said we should leave it to him, and that we should not bother on the funding, but the Yoruba Groups and Patriots under my supervision are completely responsible for the funding of the court cases in Abuja, Lagos and Cotonou”, the statement, says.